There has been an “unprecedented collapse” in the number of first-time buyers, a report claims today. It argues that the government’s Help to Buy scheme, which is designed to help people with small deposits, is a short-term solution to a problem that has become “ingrained” in the housing market.

The report, by the mortgage insurer Genworth, says there has been a 1.8 million shortfall in the number of first-time buyers since 2007 compared with expected demand, as tougher mortgage regulations and capital requirements take their toll.

Would-be first-time buyers who have not saved enough money for a deposit echoed the report’s sentiments, expressing concern that rising house prices will make it difficult to access even the expensive deals.

David Hollingworth, of London & Country Mortgages, a broker, says that there is a “much wider choice of deal now” for those with a small deposit, pointing to 95 per cent LTV loans such as HSBC’s Help to Buy backed two-year fix at 4.79 per cent and its five year fix at 5.29 per cent, and to Norwich & Peterborough’s 90 per cent LTV two-year fix at 3.54 per cent. Mr Hollingworth adds that lenders are more aware of first-timers’ immediate concerns, offering very low fees, with those above charging £99 and £195 respectively.

However, the same CML report also shows that the value of loans has increased by ten per cent on the previous quarter — suggesting that first-time buyers are having to borrow ever larger sums in line with rising house prices. Experts caution that tougher affordability criteria and rising house prices are still squeezing the number of first-timers able to secure a loan.

In its report, After Help to Buy, Genworth says that first-time buyer numbers in 2014 will fall 41 per cent short of demand, pushing the total number of frustrated buyers since 2007 beyond two million. “Even with Help to Buy, figures for the first six months of 2014 indicate there will be 296,200 first-time buyers this year when demographic trends suggest there should be 500,000,” said the insurer, which analysed the number of first-time buyers over the last few decades. 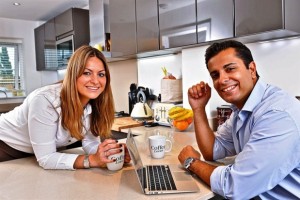 The study also suggests that the average first-time buyer needs to earn £21,000 extra each year to meet lenders’ criteria for a 95 per cent LTV mortgage compared with what they would need to earn for a 75 per cent LTV. Taking an average first-time buyer home of £147,000 and a typical two- year fixed rate loan, a borrower on a 75 per cent LTV would pay £496 a month on a rate of 2.53 per cent, while a 95 per cent LTV borrower would pay £843 on a rate of 5.32 per cent. Assuming both were assessed as being able to pay up to 30 per cent of their net income on their mortgage, the borrower with the larger deposit would need a gross salary of £24,800 while the other would need £45,800.

A high LTV loan requires a bank to have four or five times as much capital as a low LTV, says Angel Mas, president for mortgage insurance (Europe) at Genworth. “Lending to first-time buyers, which averaged 40 per cent of all mortgage lending until the mid-1980s, now makes up just 20 per cent of the mortgage market. Banks prefer to concentrate on low LTVs. This will only change if they can mitigate their risk, for example with regulated mortgage insurance, which is what happens in countries like Canada, and if prices stop climbing and five per cent deposits aren’t so out of sync with incomes. Needing a high LTV is not an indication of the quality of the borrower.”

Peter Williams, executive director of the Intermediary Mortgage Lenders Association , says: “Although we’ve witnessed a resurgence of first-time buyers in the past year, we must not get carried away. There’s a danger this could be short lived if we do not plan for Help to Buy’s departure.” The equity loan part of the scheme is available until 2020.

The Financial Conduct Authority brought in new lending criteria in April, as part of its Mortgage Market Review (MMR), which requires lenders to make more stringent checks on potential borrowers, lower income multiples to a maximum of 4.5 times a borrower’s income and carry out “stress tests”.

These stress tests ask buyers to prove that they could afford their monthly mortgage payments if the Bank of England base rate rises from its five-year low of 0.5 per cent. Barclays and Nationwide became the latest lenders to raise their “stress test” rate recently to 6.99 per cent. Lenders also ask increasingly detailed questions on a whole range of subjects, including how much money applicants spend on haircuts and holidays.

When Bruno Casimiro, 34, and his girlfriend Alexandra Imre, 33, above, applied for a mortgage with Halifax for £400,000 for the Berkeley Homes property at the Ryewood development in Sevenoaks that they moved into last year, they had a 50 per cent deposit.

However, they were still asked about their “commitment” to each other because they weren’t married, something which they were not expecting.

“We had only been together a year at the time so it did raise an eyebrow — and a smile from Alex,” says Bruno.

The couple got engaged shortly after moving in to their new home and are planning to marry next year.